Summary of March 2008 Board meeting

The National Aerospace NDT Board held a meeting at Sikorsky-Helitech in Brisbane at the end of March. This represented the second anniversary of the Board and elections to the Board and to the executive were finalised. For election to the Board a web page was set up and eligible organisations could vote on line. While it was run very smoothly and promoted through CASA and AINDT channels, future use of this approach will need even greater publicity and promotion. The Board gained the expertise of Jason Maitland as a representative for the Regional Airlines. This sector of the industry did not have a nominated representative on the Board up until now.

The business of the meeting included an initiative to enter into a strategic alliance with the AINDT. The Board believes that there are specific benefits for both groups if closer relations are developed. The proposal will be taken to the AINDT Federal Executive by Shayne Flynn. Operational procedures continue evolve and like all existing ones, can be found on the web site. The application of the 2006 version of AS 3669 in regard to the standard for aerospace Level 3 is one such procedure which is important for the Board, CASA and the industry.

CASA was encouraged to be more definite in its expectations of the Board. To this end there were two initiatives undertaken. The first was to update and formalise a Memorandum of Understanding between CASA and the Board. Secondly, CASA is to provide to the Board details of how it believes it can be most effective in its role as described in AS 3669, but also in a more general sense to educate and assist industry. One such activity is the finalisation of two separate Airworthiness Bulletins for fluorescent penetrant and magnetic particle inspection, which will be issued shortly to replace obsolete CAOs on these subjects.

The ADF continues to take a keen interest in the Board through its position as observer. The newly appointed Commanding Officer of NDISL at the Amberley Base in Queensland, Squadron Leader Tony Wood, attended this meeting. With the increasing use of civilian contractors in military aviation, and the advent of military aircraft being operated as de facto civilian aircraft, he indicated that the harmonisation of ADF and civilian training and qualifications for NDT personnel will be fundamental to the success of this development. Jed Murray gave a presentation on what work the ADF is doing to standardise its NDT training within the Australian Qualification Framework.

Consideration of future activities received a good deal of attention and Garry Bowden was tasked with developing a draft strategic plan, based on the discussions at this meeting. Ron Quirk emphasised the importance of having a shared vision among the Board and its stakeholders, and a strategic plan is a practical way articulate the vision and maintain the focus of the Board. The Board can be contacted through the web site and welcomes inquires and suggestions. Those attending the meeting are shown in the picture at right. 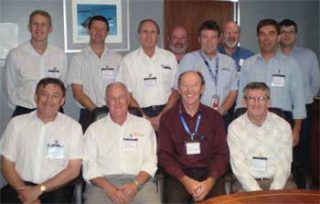